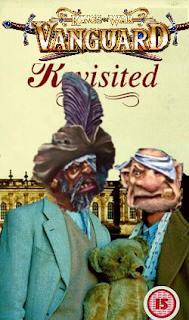 Initially sceptical about vanguard and only having played a few games I've had the chance of throwing a company together and playing in a slow burn campaign. While temporarily distracted by deadzone I am going to try and use either system to make a welcome distraction. It looks like it will be pretty good timing with the new Fire and Ice release on the way there may be some tweaks that make the game more appealing to me. I have played a handful of games and some of the mechanics look good but there seemed to be a few things that felt a bit broken and open to abuse. We have a gentleman's agreement not to use things like battle mounts in the campaign as they seem very hard work, other changes that arise we'll just adopt as the book arrives on doorsteps.


Who's clamouring for attention?

I'll be multitasking and making the most of painting up the remaining Ogres for my KoW army and aiming to use them in Vanguard. Because I am single basing a lot of the 40mm figure it should make them very adaptable. The braves which are already on 32mm bases to use in blood bowl (they are old citadel blood bowl ogres after all!) I will look to make up some adaptors for. The current list of painted options is:

In the painting in-tray and being worked on are

I love the idea of developing characters in Vangaurd so they have a history and back story. When ranked up ready for battle I think it gives real character and adds more worth than just pushing units around. i have already started a bit of fluff for my ogres but this feels like a great chance to kill multiple birds with one rock (probably thrown by an ogre).

A great leader of Men Ogres 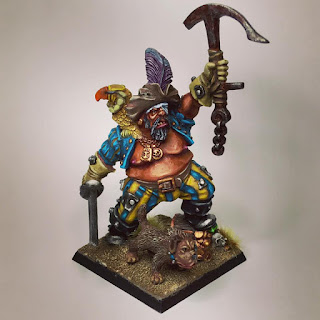 I must take a COMMAND model in my company, thankfully Mantic have released the rules for a sergeant. at 12 points cheaper than the captain he is clearly not as good at combat but does mean you can afford enough grunts and warriors to make a viable list.  I think it's probably a good chance to develop them too. Taking a Captain could mean you can make an absolute monster at higher levels but I think it's better to try and spread the love elsewhere and not put all my eggs in a basket the enemy can just avoid. A suitable name is required for such a fearsome leader so enter Captain Jock Wrekham. Scourge of the infant sea and mercenary to the highest bidder. Originally destined to be Grok in my Kings of War Army I have never really managed to fit him in the points value so he's moonlighted as a boomer sgt.  Accompanied by his faithful hound Patch and goblin serf Scroat I think he'll prove a fine leader.


And what shall we sail in?

The ogre gang has been building for some time so they need a name. They'll henceforth be the crew of the Skinned Elf. Previously christened Swift Vengeance, the vessel was boarded and plundered by the  wilful buccaneers after news that its twilight kin corsair crew were transporting a cargo of rich spices and exotic substances. With the elf crew bound and laid out on deck, the pirates emptied every locker and crate on the boat but could find no evidence of the goods. In frustration Jock ordered the captives to be thrown overboard while he interrogated the captain as to the whereabouts of his consignment. Growing ever more enraged and with the helpless prisoner yielding no answers Captain Wreckham delicately and slowly flayed the skin from the trembling but stubborn individual. Resigned to the fact the loot may never have been on board he ordered the remains of the previous incumbent be preserved and incorporated into the figurehead at the ship's bow. The delicately pale flesh provided the new ensign for the vessel as it weighed anchor and set sail.