It's Dice Jim, but not as we know it 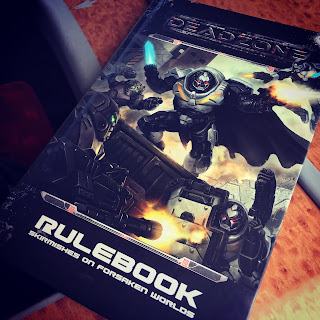 Mantic's marketing plans and principle that people will cross over games is clearly working on me. I've been peering over the fence outside the KoW scene and had a glimpse of Deadzone at Franticon 2019 and despite saying I was't going to go back to Sci-fi universe options that are out there, I have been tempted.

One of the things that puts me off playing games with individual model movement is firstly that it takes ages, if I want to play a game I don't want have to sink hours into getting the satisfaction of completing it. I loved Games Workshop's 40k 2ed when it came out but the complexity of all those individual attacks, shooting, save mods etc really drained the fun out of a large game. Necromunda 1ed solved this and the prospect of the relaunch last year was almost interesting until I saw the style of the figures and the board. As seems to be the way with the recent surge in GW specialist games they are brought out with a fanfare and then support disappears.


Secondly the "rubber tape measure" effect of things like moving one model say a 6" move then just moving all the other models up i found led to tension of people accusing each other of over moving or having to spend a huge amount of time to make sure everything has moved accurately. Add to this unit cohesion and the fact that ranges are all measured from model to model it just seems a pain to do.

Move ahead to me stumbling into Deadzone. I got hold of the rules for free from the Mantic Website and on reading the grid system seemed instantly interesting. The lack of need to worry about exact model placement for range and moving satisfied one of my bugbears. The defined mat and small scale also look nice. Before I knew it I had sourced a GCPS starter kit from Black Dragon Miniatures, picked up some bits from eBay and and a big ol' box of scenery from Rusty at the Kings of Herts bring and buy sale.

It's been a very long time since I have started a minis game which has a completely new set of rules and factions and weapons. I'll be trying to blog about what I have found out, what has been good, bad and ugly.

The inevitable question of where to start. I generally have certain thoughts on what army to chose along the lines of; I don't like the super elite high points led armies; I want models that are nice and I will enjoy painting; I like a challenge of trying a less popular faction. I have also not painted anything in years that had a uniform look and feel. More based on the last point than any other led me towards the GCPS. I like the idea of the basic infantry force and being able to use a Strider (In my eyes a mech warrior reminiscent of my first every battletech games in the 90s) pushed me over the edge.

On arrival my box of minis was packed full of some very good quality and highly detailed plastic sprues. they feel the same as the naiads I had put together for my Trident Realm army. There are heaps of options and I'm getting my head round trying to figure out what the weapons options are. There is an obvious similarity with every other Sci-Fi GI that has ever been produced but moving from a history of bolt(x) and las(x) weapons will take some getting used to.

I like the idea of massed firepower in swarms and the HALO entry rangers seem great fun for laying down fields of fire and scouting. With the low model cost there may also be the option of fielding more than one Strider!

The starter pack I got included the desert neoprene play mat and as I have enough scenery now to go with it I like the idea of building it as a "home turf" to use when I play and the strike Team I assemble will try to fit in too. I want to build up fluff around the Corporation the troopers are working for and the terrain and want to move towards it being a desert style environment with mines. The buildings to fight over will be hab blocks the sort of prefab units that would process workers endlessly into the mines. The deserted facility is patrolled and secured by the GCPS troopers who are wearing appropriately camouflaged combat fatigues. All this lead me to assembling a bog standard marine and hashing together this:

I am still wading through the list of guns options and troops and figuring out what stuff works best together. I am liking the idea of Rangers and a Ranger Sgt. backed up by Mortars and Strider(s) but it's probably a pipe dream with the points liit. For now I am just enjoying painting something fresh and looking forward to getting some games in.
Deadzone GCPS Mantic