November 13, 2018
Having got my 1000pts of Trident Realms in the bag and painted I have volunteered to paint my brother's old High Elf army for use in the Franticon event next march. He'll be teaming up with me for doubles and going it alone on the Sunday. I've always been suspicious of elves but as it's a pretty elite army it should paint up pretty quick and I'm keen to build a list which showcases all the KoW mechanics for my brother to learn. I'm also keen not to stack it hordes of bane chanted archers and Drakon Riders. I'll try and base the army around chariots, cavalry and a dragon to give the feel of a sea borne raiding party all highly mobile. I need to make sure that it's not over complicated so may steer away from Vanugaurding units. All of this is a very cunning plan as it will give me further incentive to paint and get another army sorted. As it's such a small force I'll be trying to up the paint and modeling effort and try out different colour schemes. 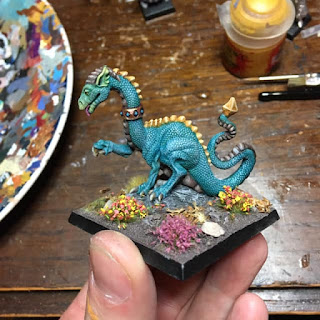 If you've seen any of my other KoW armies it's become apparent that I can only really paint Teal. I've messed about with shading other colours but the off the shelf citadel colours work so well I'll stick with them. This will make it heaps quicker. First up is an old Grenadier pet dragon I had knocking about. It was an absolute joy to paint, I think a lot of the expressiveness of models has been lost in the current era and the ability for a sculptor to add character disappeared. Everything seems so cold and angry! I went for the usual teal in the hope I can tie this in to the infantry later and went to town on the base. I'm planning to do a heathland style basing with dirt tracks, dried leaves and flowers. Hopefully I have enough of the same style of flock and tufts as I have no idea where to get any more!

Below are a test piece and the dragon I'm working on. Turns out 1000pts can be a pretty low model count with elves! 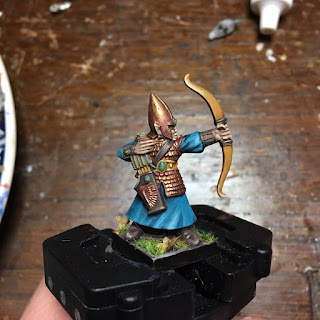 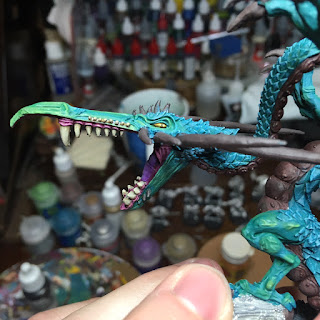 Hopefully by the next post I will have rattled out the dragon and a chariot horde to make it a legal list. I'll be trying to arrange some multi-bases of archers and spearmen to give me the choice of sea guard or regular infantry in the future. The sea guard feel like they go nicely with the fluff.