The model that caught my eye and drew me deeper down the rabbit hole into Mantic's sci-fi universe and into Deadzone. The concept of mechs and armoured walkers in wargaming has been with me for over two decades. I first prized open a copy of GW's Space Marine in the 90s after meticulously studying the box art in all its glory. The titans just looked amazing. Ridiculously  impractical but who cares when they look cool. This evolved through systems into playing some battle tech /mech warrior both online and with minis. Few chances to play this meant I progressed through to 2ed 40k with the Imperial guard Sentinels. Then a series of films that captivated my imagination and just looked so damned cool arrived. The Matrix features some iconic walkers in their APUs, the loping run coupled with the heavy guns pouring streams of fire looked fantastic. Avatar's AMP exo-skeletons seem closest to the Mantic models but just feel a bit less violent looking, too cure and cuddly. Either way, I love the idea of strapping into a hydraulically augmented suit and taking the fight to my foes. That's probably enough misty eyed nostalgia for now. Onward to the (near) future...

It seems traditional (as traditional as a fourth blog post in a series can get) to start off looking at the stats on the strider. There are no other striders to compare it with within the GCPS so I'll take a look at it compared with the other faction's flavours .


There's not a huge amount of difference at this level. The Plague gets a more combat orientated option and the Enforcer a shootier one. There's also a huge consideration of what units a strider will support and what weapons load outs are possible. I have barely got my head into the GCPS so making any kind of comment on the other factions at this point would be churlish. For now I'll concentrate on the options I have available for my burgeoning band of brothers (and sisters).

5s across the board mean the Strider is a great utility option, combining this with the Armour 3, unit size 4 and Solid rule ensure that it's the polar opposite of staying power compared with your organic units. It's a clear choice for a roadblock unit but with all that bulk, the same limited move stats as your regular infantry and the inability to climb levels without a ramp, there are other considerations. Your opponent if they are cunning may simply avoid the threat. I think there are load outs that can mitigate this which are probably better discussed in line with the next section.

As seems to be a common theme with the GCPS you do get a lot of choices for your strider. I suspect this is because of the options that were already available in Warpath and Firefight that have been ported over. The role that you want the strider to play will dictate these options. I think these fall into: 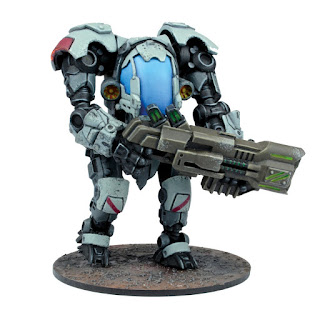 The pure shooter options are the Polaris Cannon and the Heavy Blast laser. It seems wrong to discount one of these so readily but I can't see a place for the laser. The WOF(2) and supression is a nice combination but if they are a shooter I want my strider to be blasting units off the board, not performing the pinning and stalling action that all my other rapid fire totting infantry can do for a fraction of the price. The Polaris cannon with its AP4 will put damage on most things, especially if you can get a clear shot and throw some command actions at it. Range 10 also means that you can reach out and touch anywhere. Points don't really come into it, if you're investing in a strider you shell out for what you need. There's only one option for the shooter for me, take the cannon (added bonus is that it's what the kit comes with). 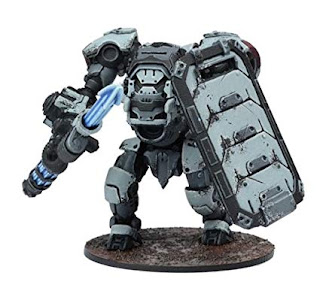 At the opposite end of the spectrum you can build some real combat nasties. The options the would combine well are the Grav-Ram Spear, Aggressor Shield and Chainsaw. Each of these take a single hardpoint  up so you can work through all the combinations with a bit of conversion work on the existing Mantic Models. The choice for hitting people comes down to a points discussion. If I can find the points I would always go for the Grav-Ram, the extra options it gives in a shoot/fight weapon on one hardpoint is too good to turn down. Always. It may be tempting to take smoke to help the advance with this model but after some thought (cheers Ben) it may jsut end up blocking everyone else. The rockets seem a maybe but if you are running the Spear then this replaces the need for them. 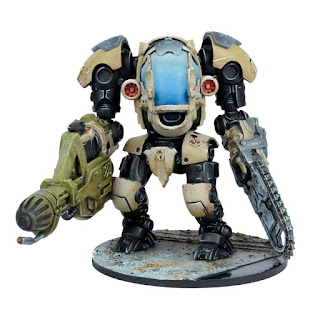 There are good blends of the smasher options that can be coupled with a ranged choice. The Grav-Ram stands on top of the list for this and I think just using one on a hardpoint means a budget option is there. The flamer is a perfect accompaniment to a combat hardpoint allowing you to get up close and personal and pairing it with a shield means you can get close and still not be too afraid of succumbing to a combat monster. It's a cheap and solid option. I'd at a pinch go for shield and flamer for a hybrid option but it's a very close run thing between this, shield and spear or just spear. Once I have had a chance to play around with options I'll maybe reconsider. Setting a whole cube on fire and being able to take the backlash is just too tempting 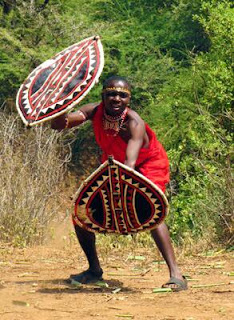 Probably not the wisest idea but there are some slightly odd builds you can make. The ones I can see that could still work (kind of) are double flamer or double shield. The only purpose of the double flamer is if you are incredibly paranoid about your volatile flamer bowling up "who cares about that one? I've got a spare". It'd have some great modelling options but it's not really worth it. The second choice I think has some merit. Taking two walker shields gives you +2 Armour. wondering about with Armour 5 and using some extra move or fight dice once you get close could prove a massive pain in the arse to shift. It's maybe got some cool conversion options too. 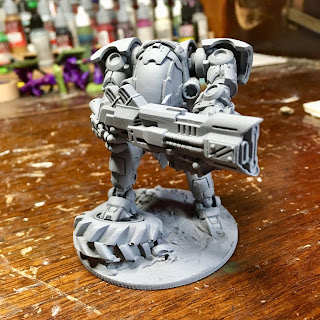 The strider seems a great way to add some backbone to my force and there are roles available that fill holes in the list. There is probably a reasonable argument to take 2 and really double down. A pair of budget spear-wielding striders to provide a distraction could work nicely. The overarching consideration though is probably their cost. You'll be spending 40pts minimum to get them tooled up each. that buys you 5(!) regular marines, 8 recruits, two rangers etc. It's probably easy to get distracted by the toys and not remember that GCPS is about bodies and the guns that they carry. (although a super elite list with 3 striders would be hilarious). For now I'm using magnets and keeping my options open. 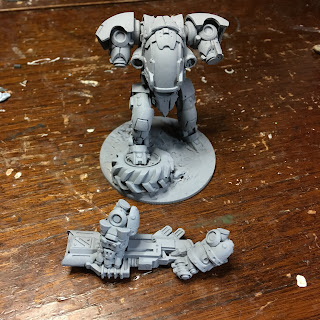