I have assembled a fair few plastic kits over the years but in recent years have been reverting to lead and metal recently to paint up my KoW Ogres. I favour single models while although they may lack variety in poses they stop me sticking my fingers together and cursing at the number of evil mould lines to remove. Assembling a small force of 15-20 models max should be OK though and the poses and weapon combinations will be essential.

A quick mention on the quality of the minis. I've not been around the Deadzone scene for long but I did pick up some Nameless models to use in my Mantic-centric Trident Realm army to use as depth horrors. They were soft PVC and while they painted up OK with some drybrushing and washes I wouldn't say I was falling over myself to buy more of them. The GCPS sprues are all high quality hard plastic with good levels of definition and depth. The mould lines are a lot nicer to deal with than the restic or PVC of other Mantic minis I have used. The metal pieces that are used to make the characters and weapons teams are OK but do tend to be a touch softer than the GW ones I grew up with. It can make cleaning up flash and lines a little delicate especially as the parts in some cases are very small. The final piece to discuss is the strider. It's the model that caught my eye and drew me into Deadzone. As with the rest of the models in the kit it comes with no instructions. The infantry are ok for this as they are labelled on the sprues and the weapons team I could work out from the box art. The bag of Restic (aaaargh) pieces that were in the strider bag took a small amount of sorting for me assemble. I like that there are so many parts though as it gives some nice options to pose the walker.

Who's going to to do the shootin' 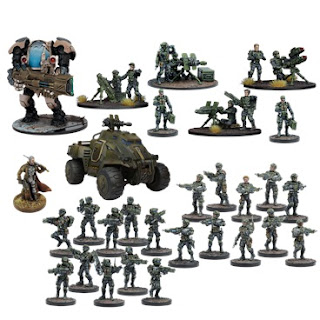 I picked up the Warpath Starter Box minus the wheeled vehicle as a starting point as for the price it looked like I got a good variety of options. Anecdotally and now having studied the rules in Command Protocols: Escalation I can see that the army depends on the best mix of guns, who is shooting them and from where. Unpacking the models from the boxes and baggies it was clear what each of the heavy weapons were. They are a pretty standard and well recognisable selection of missiles, mortars, heavy machine gun and canon looking options. A bit of muddling through and it allows me to make two of each, the key thing being that you need the torsos from the main infantry sprues to complete the crew. With the Metal leader figure a one piece model, this left me 20 bodies to build. Some semblance of a plan is forming so I am aiming to split them like this:
I am hoping that this gives enough of a mix of options for points to start with and by adding the general and the Strider along with some weapon upgrades I have plenty of lists I can build.

A key thing when playing individual skirmish games for me is identifying what model is what, not just for me but for the opponent too. In games such as campaign games such as bloodbowl that I have played it's simple to number the should pads or bases of minis. There are even skill rings you can get to go round the bases to note skill and stat upgrades. I want my models to be as WYSIWYG as possible and in modelling terms the best way with the kit I have seems to be the heads. Adding squad numbers to the models could also help here.

It's an amusing trend that higher ranked officers in units tend to be the ones with bare heads. Maybe they are just so grizzled they don't fear the enemy fire, or perhaps they get more out of the troops when they can see the whites of their eyes. On the standard sprues you get a combination of:

This is supplemented up with the metal heads for the engineers and if I really wanted the restic ones for the strider.

I'll be using the open faced visor for standard marines, the visor helmet for vets and the full helmet for the rangers as they'll need it for their HALO drops. I may be one short on the veterans so it may get upgraded to a bare head to make them a leader of some sort. 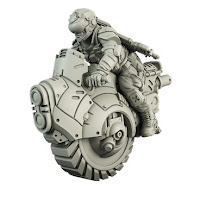 Outside of the infantry there are a couple of cool looking options. I fancy a unicycle riding trooper but the purchase price is a bit high when I am only looking at getting into the game. The strider that I have with the box I'll likely make up with the enclosed cockpit and magnetise it to have the combat or gun options. Outside of that there aren't a lot of options. If I get a second one I may look at running a pair with the shield/Spear combos, partly because it would look amusing.

Next up I'll look at guns