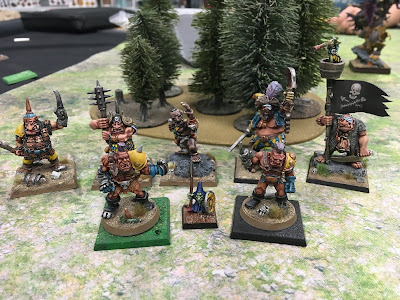 Game one of the Campaign for the crew of the skinned elf was against the Northern Alliance's Black Order. The pair of scouting parties had tracked down a massive walking monstrosity and would set out to do their best to irritate by a thousand cuts.

The Ogres set out to war with:
The Northerners formed up with:
As per the scenario the giant set up in the centre of the board, the pirates in two distinct bands with the braves, siege breaker and warlock on the left and the others on the right. The opposing archers deployed in a group behind a wall facing the centre, the cavalry and queen in the middle and the load archer on the flank hiding in some ruins. 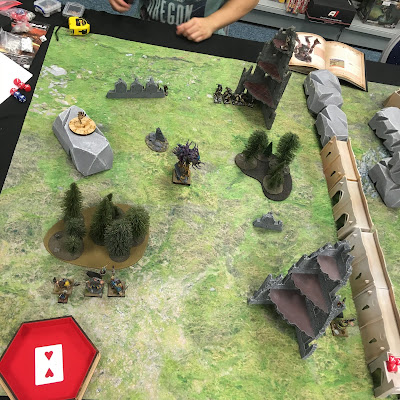 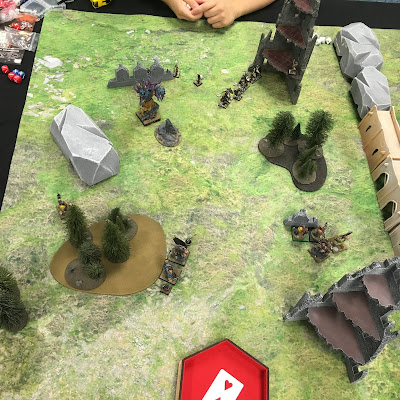 The first round began cagily with the bowmen taking aim and despite the stealth of the hulking beast their shafts found their marks dealing several grievous wounds. Eager to get to the fight One eye'd Grok skirted the woods wile the rest of his crew-mates advanced in the centre. The cavalry formed up in the centre looking to avoid the potential lines of rampage from the giant; their unsteady mounts bucking at the site of the monstrosity. Finally the lone archer concealed in the ruins gently dropped down through the broken flooring to draw a bead and further irritate the hulk.

Early advantage to the warriors from the north as the giant slowly became more enraged. The bulk of the power advantage the ogres had effectively wasted. 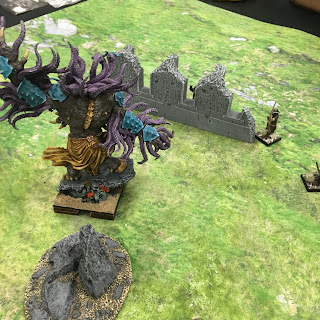 Clearly angered by the bowfire from the tiny warriors scrambling for cover in the ruined walls the giant advanced towards them. seeing his chance to inflict damage Grok launched himself forward, charging the rear of the giant and carving two bloody swathes of flesh out of its hind quarters. His joy was short lived as the cavalry spurred their mounts and thundered into both him and the giant. The ogre was incapacitated by the thane, allowing his companion to dispatch the mauler in short order with. Their comrade further goaded the beast by inflicting superficial wounds upon it. The remainder of the ogres advanced. succumbing to bloodlust, M'Goor'Gn'Throg broke free from the cover of the woods in an effort to close the gap to his foes. His eagerness proved fatal as his muscled form was brought to a shuddering halt by the black fletched arrows of the Alliance's missiles. 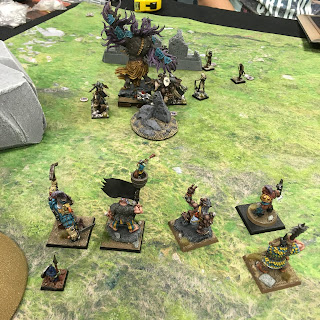 Damage to the Giant was tied this turn but with two Ogres felled the Northern Alliance held the advantage. 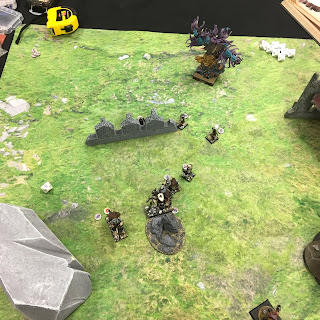 Having been irritated by bowfire and having been assaulted in the rear the Giant charged through the Northern Alliance ranks, its flailing limbs throwing armoured knight and nimble bowman aside alike. One of the Hurscals and the Ice Queen were both knocked down by the force of the beast and all three archers slaughtered as the deranged Colossus ran amok. 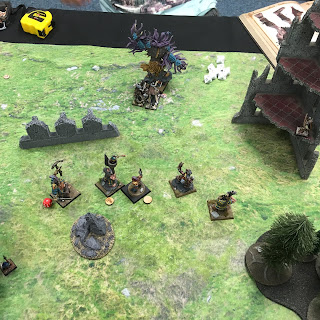 In an act of vengeance the thane gave chase along with the Hurscal that remained standing. Their fellow downed cavalryman was set upon* and removed from the fight. The ice queen, recovering from her wounds staggered to her feet to use her helm of confidence;  only to be rushed by yet more ogres and downed, finished off by the warlock's mystical chanting. The archer steadied his aim and let fly toward the Ogre Sgt, wounding him slightly. 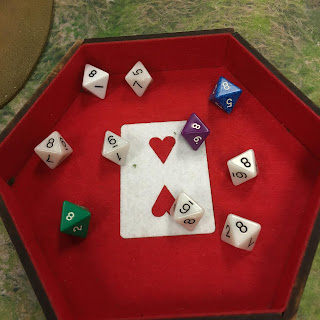 Despite their depleted numbers the Northern alliance again had wounded the Giant the most and had notched up more victory points.

The Carnage is complete 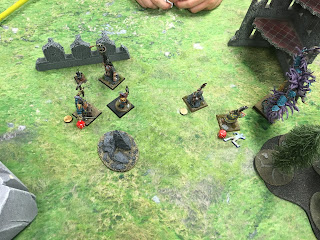 In a final effort the Giant wheeled round and headed back to attack the ogre siege breaker, wounding the Ice Kin Hunter in the process. In a final attempt to inflict damage on the Ogre warband both remaining horsemen charged into Jock Wrekham. The Thegn swung his heavy sword and the Sergeant retaliated felling the knight. The accompanying hurscal threw his weight behind his weapon but failed to bring the hulking Seaman down. Choosing to save his energy to apply bandages Jock let his fellow crew swoop on the hapless knights who were desperately outnumbered and locked in combat. Before he could notch and arrow the remaining member of the Northern alliance's warband was bought to his knees by the supernatural chanting of Grakem'Goroth aided by his lucky charm.

The surviving ogres surveyed the scene and edged away from the giant who was standing swathed in the blood of elf bowmen. The Raiders from the North had been routed to a man and all that remained was to pick over the bodies for loot.

One eye'd Grok paid for his eagerness and shall live on but with a severed Sword arm reducing his melee effectiveness. The loss of M'Goor'Gn'Throg was mourned but a lesson learned about the value of breaking cover too soon when the area of battle fielded so many ranged enemies. As the sun set and the Ogres returned to their ship they came across a craven crowd of goblins who were willing to buy the trinkets and keepsakes looted from the dead elves making a modest profit. After he dispatched two of the opposition with his spells Jock commended the band's ogre who retired to his lodgings to study and learn the occult teaching of his elders. Jock meanwhile benefited from the combat the Thegn had sought from him and improved his skill in single combat.

The narrative aspect of the game and Vanguard in general appeals to me immensely. I love that the over eager mauler in my warband charged in to take advantage of a rear assault on the giant only to be cut down by the rampaging knights. The assault being so brutal it has permanently injured his arm. My sergeant is turning into a combat monster and I may buy him some items to keep him in the fight longer. The warlock was amazing with the tribal assault spell dealing unsavable damage at key times to force nerve checks, boosted by his braves.

On the other hand the scenario was massively one sided in my favour. The giant killed 3 grunts and knocked down two key models in the Black Order on turn 3 allowing me to circle and mop up reasonably easily. If the dice had gone another way and he had assaulted my lines instead it may have been a very different story. I only won the scenario by total party kill. By Turn 4 I was heavily behind on VPs and stood little chance of catching up on my own. I think this scenario is good fun and using the model we had available felt great as it ran about waving appendages all over the place. I'd hate to play this scenario in any kind of organised event as along with ones such as the portal it is massively swingy. I am also trying to figure out the best way to spend my power dice as I often feel a little lost, below are the power I threw away in Turn 1! 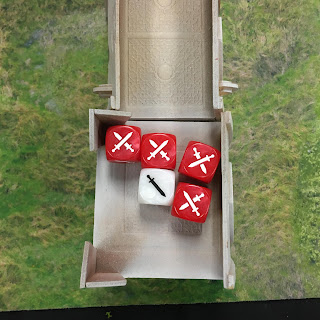 The battle has encouraged me to dig out some bits and pieces to set up another scenario for a clash between the Black Order and the crew of the Skinned Elf. Vanguard is growing on me, defiantly as a casual thing as I am not sure it is quite refined enough for competitive play yet but it was still fun. 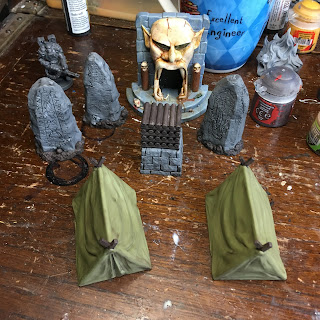 *A massive apology is due as it turns out I had blithely assumed that my sgt had a move value of 6, allowing him to charge into the downed Hurscal and help dispatch him. It made a pretty big difference against an already uphill battle that the Black Order were facing.