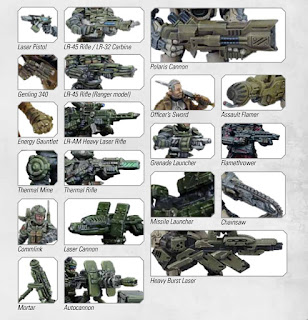 With the base sprues I have I am limited to
I am hoping with a sharp knife and some experimenting I can create a heavy laser rifle, Thermal Rifle, Marksmen Rifle & Accutek AWP. Although stocking up on all the weird and magical options makes my squishy base troopers pretty expensive and reduces the model count. Reducing the model count means few guns and as guns is where the GCPS is strong it's probably not a good idea.

The base options that my infantry come with are the Laser Rifle and Laser Carbine. The better shooting and WOF[1] on the carbine seems a great option for the Vets at only 3 points more. Having reviewed the weapons options I am now looking at ditching the regular marines option as I think they fall into the classic Value Vs Price trap. I shall now conduct a highly theoretical assessment of arms,. stat lines and points below...


So here goes with a non-gun section in a "talk about guns" post. An interesting thing to point out is that the options all have Sv5+ and no armour. In every case if they are fighting I am doing something wrong as I need them to be blasting away not attempting to club people with a rifle butt. For this reason I am discounting the Fight values, anything from them is a bonus. All have a rapid fire weapon and a small difference that not all can take small arms options. Let's take a look at the small arms options to see if I care:

The laser rifle is a pointless option as they have it or better, the pistol is a worse option than the rifle so that's a no. This leaves the shotgun. At R2 and having already discussed that I want my guys blasting away not getting in the think of it it's not a good choice. It also doesn't come with Rapid Fire. I can therefore discount another differentiator on the unit choice.

This leaves us really with Pts Vs Shoot stat. The Vet stands head and shoulders above the other two options. The WOF is a significant difference. None of the options have any AP so they'll be maybe taking out smaller infantry but stand no chance against bigger strength models. Using the rapid fire to lay down some suppression will be key. The vet clearly does this the best and I feel is an ideal option for ensuring stuff gets done and at 11points is a steal. It's now a direct run off between the Recruit and the Marine...

When making this comparison there is another factor to be taken into consideration, the number of activations I'd have and the ability to claim objectives. The only other option for claiming objectives consistently I can see is the strider. All the other models are going to be too busy doing what they are paid to and showering empty casings or battery packs onto the floor as they let lose a hail of fire. 3 Marines is the same cost as 4 Recruits. 4 is clearly a bigger number than 3 which is why I am afraid the humble Marine will be consigned to the bench for me. I just feel it is more useful in the game to have pieces that can take the objectives and go early to flush out enemy moves while still maybe getting the odd pop shot off. GCPS are not really a super elite army (although I am sure you could build one) so numbers and number of guns is their strength. 4 points for the recruit base (removing the 2points for the gun) compared with 6 for the marine means, I just can't find a place for the Second cheapest bottle of wine.

With the grunts sorted I'll turn my attention to the guys I think warrant investment in arms. First stop is the Marine Specialist. While their run of the mill associate has been discounted the Specialist has an overwhelming set of options to chose from. I see the options being supporting fire/sniper role or up front and personal. For me the flame thrower goes in the same bucket of "woah now that's too close for me". Aside from this it then comes down to a grenade launcher or a sniper rifle.

The grenade launcher working in tandem with the mortars and the eye in the sky feature of the ranger sgt seems a good shout. plenty of flexibility and can still run away and shoot if needed .its range of 8 projects a huge threat too. I'll take one of those please! Especially as it's the only access to the explosive weapon. the remaining rifles are all available to the Rangers and the Specialists. While the ranger is twice the points the aerial deployment means that given the choice, the fields of fire etc the only way I would field anything other than a ranger with a suped up rifle is if I was very tight on points. The options are: 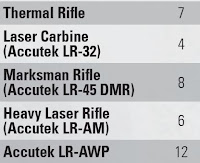 The AM and AWP appear a budget and regular option for the same thing as they both have heavy. Assuming that with the aerial drop the ranger would be higher up and probably likely to get a clear shot the AWP has the possibility of a ludicrous amount of dice (3+2+1+2) but paying a whopping 12 points to make a ranger 28 seems very very pricey. The 45-DMR probably does a better job for me as without heavy I can move and shoot and shoot again with a command die if I need to. The ability to move should help me get more of the clear site dice bonuses. Although the AM comes with AP1 I think again the ability to move of the DMR and the holo scope means I can get a better chance of an extra success and "count as" an AP stat.

The AP2 of the thermal rifle is very appealing for tackling more heavily armoured enemies and probably just sits on the right side of the "don't get to close" fence. Again the assumption is that the shooter will be higher with the aerial drop attribute and should get a clear line of site every now and then. If I have the points it is a solid addition to the mix. Especially on a S5+ model. It is however, more expensive than another recruit! 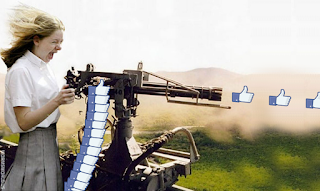 Finally I come to what I think is the best punch for points gun I have available. At a mere 4 points I can give my ranger a Laser Carbine. The weight of fire, rapid fire, height and good lines of site provided by an aerial drop means I should be pretty sure of dealing with light infantry and if a more heavily armoured option is available firing for effect has a good chance too. An effective range of 7 when including a move and the advanced deployment options available mean a couple of shooters in good spots could really slow the enemy's advance.

I'll put the Carbine and DMR and grenade launcher in the yes pile and the Thermal rifle in the maybe.

Everything above is clearly to be taken with a pinch of salt a I really am no authority on the game having never played it and only read through the rules and watched a couple of how-2 games. (Cheers WOF). I thought it would be amusing to put my thought processes down and review after a few games to see what after rolling some dice. I think there are a lot of toys to play with for the GCPS and if not careful I could end up creating a super elite army of very squishy things that shoot really well but die to a stiff breeze. Cheap, numerous and guns shall be the mantra.

As I don't have the model I haven't considered the monocycle as an upgrade option, I may have a look at a later date when I am more clued up.

Next up I'll look at the leader options available and the exciting prospect of the strider(s) and just to prove I am actually trying to get a strike force built here's a WIP photo. 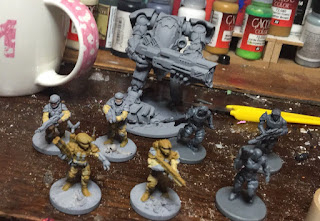