It's been a long time since I have blogged so what's the best way to solve this? Get someone else to write a piece! A guest contribution from Kings of Hert's Mat Green on the ins and outs of dice rolling. Mat hosted the first competitive wargaming event I ever attended and has, with gaming partner in crime Paul, been one of the champions in growing a KoW tournament scene in the London area. It may be the first of many entries, we'll see! That's enough rambling from me though. Over to Mat...

I was reading an article about dice rolling etiquette in Wargames, Soldiers and Strategy issue 105 recently. It was a great article, and I suggest you go read it before we go any further. Go on. It’s a great mag, Ill wait. Back already? Cool.

The article was talking about gaming in general, but rolling of dice in Kings of War, and the rules and norms involved have come up a few times on podcasts, forums and Facebook threads. It set me to thinking. At the risk of making this entirely an exercise in folly, I almost never see dice related problems at the Kings of War tables. Most of what I’ve heard has been second or third hand horror stories and most involve ‘the other game’. However, since these are often unwritten rules at best, and pure preferences at worst, I (like the magazine article author), thought it was worth getting them down on paper, even if only for new players.

One of the first points bought up in the article, that I think everyone would agree with, is that dice should be rolled in full view of your opponent. Hiding the dice doesn’t mean you are cheating, or that it’s even possible, but it does look suspicious and frankly takes some of the fun away from your opponent. In Kings of War, scenery also comes into play. We rarely have a dedicated table to roll on, so even when we try to roll in the open, the odds of a dice ending up under a tree or behind a building are quite high. It’s good practice to show (or at least offer to show) these dice to your opponent before you move them. 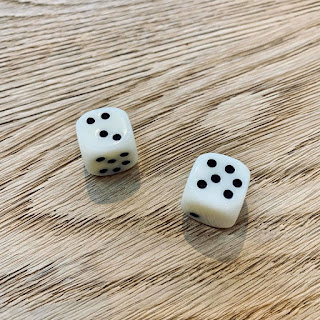 A linked point bought up, is what happens if the dice falls on the floor? Personally, if it fell in full view, I’m not bothered about counting it, but that’s a dangerous precedent to set. Any sort of choice making here can lead to some people keeping the good ones and quickly picking up the bad. It’s probably worth just always rerolling. The article made an interesting point about the other dive in the roll, however. He stated that the accepted etiquette is to only reroll the dropped dice for a group roll of independent tests (i.e. rolling 10 ‘to hit’ rolls), but to force the reroll of both dice, if the roll was making a combined score (such as a nerve check). This something I’ve never seen, and if half a nerve check fell on the floor, I’d not reroll the safe one. Maybe I’m unwittingly upsetting people here. 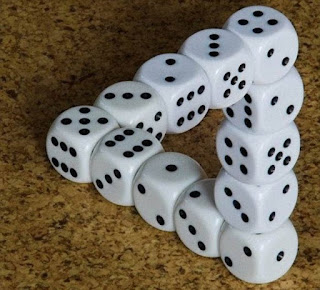 The linked, and more common issue is cocked dice. Now, I’ve seen so many opinions on this and if anything, it’s the thing that has most commonly rubbed me up the wrong way. I’ve seen various solutions to the problem, and as is often the case when various options appear, assumptions about what you will do often lead to disagreements. Being made reroll a success because the dice is two degrees off flat is as annoying as seeing someone claim a dive balanced at forty-five degrees. Of the two most common solutions, bang the table and balance a dice on top, I think I prefer the latter, if only for the safety of my models.


A final part to this fair rolling, is vocalising what you are doing. 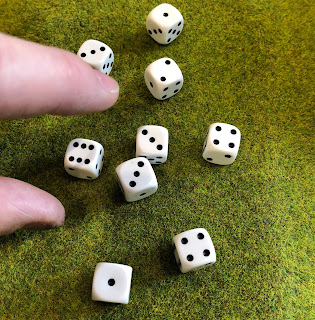 I would add, that there is some etiquette to be followed around picking dice back up again. As we have already said, its best to at least allow your opponent the chance to see a roll
before you start picking up dice, but which ones do you pick up? I’d not been playing for long when someone told me to always pick up the fail and leave the successes until the end. The reasons make sense. If you pick up dice wrong, there is now no evidence and its best that any errors you make are in your opponents’ favour. That way, when you have removed all the misses you can say (out loud) these are all hits and give your opponent a chance to spot any mistakes. Again, I know we are often on a clock, be we need to give them time to cast an eye over.

The collections of dice I’ve seen people bring to the table have been as diverse as the people themselves. As long as they are real dice and in decent enough quantity that excessive rerolling isn’t needed then really, it’s all good, but I do have my preferences. Firstly, I’m not a fan of eclectic mixes of dice, all sizes, patterns and styles. There is nothing inherently bad about it, but I don’t find it much harder to read at speed and easier for mistakes to slip in. 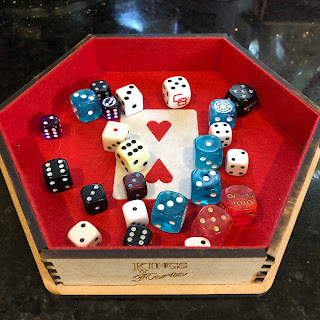 Secondly, there are the custom six and custom one dice. I know there are really popular and give people a real theme to their accessories. They are fine, I’m not a fan, as again I find them slower to read, but they are not a big problem. I do think it’s imperative, however, to make it clear at the start of the game what the symbols mean. Mostly an odd thing on a dice means a six, but it’s not always the case. Linking to the point above, I’m much less happy when these dice are part of a mix being thrown, especially with some picture is a six dice and some different picture is a one. Like I said, that’s just me.

My personal preference is to get out sets of matching, but different coloured dice. I’ll have a couple of sets of ten in one colour each and a set of twenty on a third. That way I can quickly identify and pick up ten, twenty, thirty of forty dice and then subtract the number I don’t need. If a die is missed, its only ever me it negatively impacts, and it really speeds me up.

The WSS article did, however, bring up a few points I didn’t fully agree with, or at least can’t really see ever being a problem for us.

Firstly, the author stated an unwritten rule that, if a set of dice has an unusually high run of good luck, its fair, common even, for people to ask you to change them. I’m not sure I’ve ever seen that happen, and I’ve seen some runs of box cars nerve checks and abyssal dwarf mortar hits that make your eyes water. Secondly, he suggested that shaking the dice for too long, more than a couple of shakes, is bad form. This is not something that’s ever annoyed me, and if anything, it just makes the roll that much more random. Finally, I wasn’t sure about the prohibition on touching your opponent’s dice.
Miniatures, yes, and certainly don’t steal them, but I’ve never seen anyone so precious that they have winced at someone touching their dice. If anything, that would make me suspicious.

With that, I’ll stop jabbering on, but I am genuinely interested to hear what other people think. Are there some rule of good dice play I’ve missed, do people have any other ways of dealing with cocked dice and does it really work to smash a bad dice in sight of its brothers and sisters? Thanks for reading.

As mentioned, Paul and Mat host some great friendly events in the North London area, often at smaller points values and doubles, they have a keen eye on introducing new players and always provide a welcoming environment.

Check out their events page here and community page here for more info!