March 02, 2018
Now everything’s arrived I can slightly belated end start talking about what all the goodies look like. I’ll take each box in turn and give my unasked for opinion on first impressions, quality etc. It’s my first really
foray into Mantic produced minis so I was intrigued by the packaging they arrived in. Being used to small blisters and boxes of sprues or polystyrene separated metal parts I was met with cardboard boxes, bags of metal and what appeared to be large DVD cases. Undaunted I pressed on. 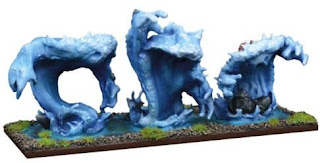 I’ll start with one of the first boxes that turned up, the water elementals. They came in one of the plastic boxes and inside were bagged up in zip lock bags with some thin foam padding and 50mm MDF bases. The bases are pretty straight forward and I’ll be putting them aside as I plan to multibase everything I can so I won’t bother assessing them in depth. They’re squares. I prized open the seals and tipped out the contents of the elementals.

The first thing i noticed was a strange chalky film on the pieces I guess this is the release agent used and after a quick wash of the pieces they began to feel normal again. I’m used to washing resins and plastics but these are the first metals I’ve ever had to do this with. All of the pieces were present and when offered up there wasn’t any bending or alignment to attend to. This is to be as expected as they are big old lumps. 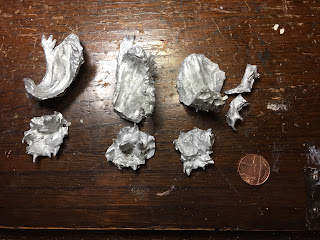 The casting quality I would say is OK. Some of the thinner areas are a little bendy and there are a couple of joints that needed filling with a bit of green stuff. One thing I think was very useful was the addition of dimples and raised areas in the mating surfaces to make sure firstly the right piece went in the right place; but also that they aligned correctly. 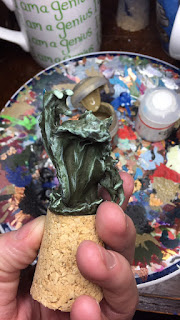 I like the overall feel of the figures and they feel dynamic enough to be mountains of crushing water enveloping the enemy. As I wanted the models to fit in with the darker olive green I decided to paint them in the same fashion, arguing that they were a tumultuous churn of foreboding deep rather than the Bournemouth beach blue on the box. I tied in the fish and octopus colours with my plans for the Thuul and naiads. I’m trying to work with a limited palette for both coherence and speed and when my bases turn up I’ll get the horde of 6 assembled. Hopefully with some extra detailing in the water to add some interest. 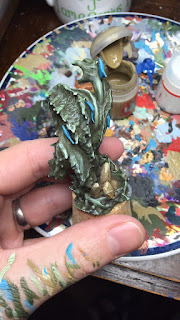 Two test pieces down and I’ll be interspersing the rest of the figures with the monotony of batch painting a Naiad horde, just to break things up.

I like the models and the sculptor has done a good job but they do lack some of the crisp finesse I’m used to with other metal minis. They’re still really fun and I’m looking forward to some surge shenanigans Next up I’ll be talking through and tackling the paint jobs on Naiads...
KoW Trident-Realms Unboxing