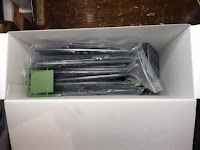 Both the regular army and mega army come with a shoal of Naiads to contend with. In both cases they are provided as part of the large cardboard boxed sets and within this are individual bagged on sprues of 5. Interestingly the sprues contain the arms, legs heads command bits and weapons. The bodies themselves (and a mysterious extra part to be explained later) all come lose and pre clipped from their frames. There is one exception to this being a leg and torso combo that comes in two parts. This made me feel a little uneasy as it reminded me of days gone by where I would twist (!) models from sprues before I learnt of clippers. However they have managed it though, Mantic have ensured that there is enough material left not to impact the sculpts. 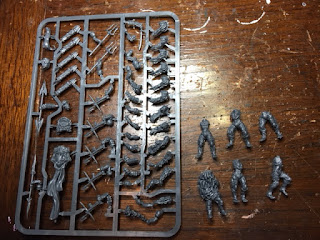 There are more than enough heads to go round but as with the other mantic hard plastics I’ve seen the arm combos are exactly the number you need. I have no idea what I’ll do with all the extra heads but I’m sure I’ll figure something out. The hard plastic is well made and apart from a couple of annoyances the gates onto the miniatures are in sensible places to clip away. There is a good level of detail and I’m more than happy with them. The real joy when I came to start assembling. Mould lines are minimal and didn't take much prep. The requisite numbers of 20mm square bases were also int he box. I don’t intend to use Heartpiercers much so I concentrated on the Ensnarers. 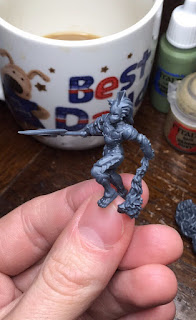 There is so much dynamism in the combinations of arms on these figures. I thought that I’d be limited to poses and left/right arm selections. For the first time in any minis I’ve ever had there was the option to have weapons in left or right hands. There are enough to make all five up with nets or harpoon guns and if you need there is a shield, conch horn and standard. One of the weapons is a sword and its in the same hand as the shield so it does feel a bit odd as this is traditionally the weapon of choice traditionally for the unit champion. The torsos range from standing to twisted ready to strike and running. There is the odd area on the arms where, when painting i wasn’t sure if it was meant to be skin or armour but they are limited.

As has been the trend over the years miniature companies are putting little goodies into the sprues as extras. My lower abyssal and succubi got imps. The Naiads get toads, otters and the strange extra body bagged up with the others.  While i could use the little creatures as base decoration I’ll likely use them as swarms as I have more than enough of them. The extra bit in the bag turns out to be a netted Basilean to use with one of the arms on the main sprue. It’s a nice idea and I’ll probably include a couple but the assembled mini is a bit big and it could look a little repetitive. I has tempted me to look at converting some to be bagged up dwarves or other races. We’ll see. 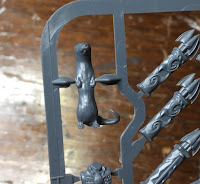 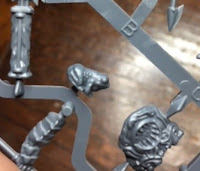 I love these sculpts. They are dynamic and the assembly options are endless. The detail is crisp and there aren’t too many places were it is ambiguous. I’ll be interspersing painting batches of these with the other units just to keep my attention span. Next up, the infantry who look like a Theme Hospital ailment, the Thuul.
KoW Trident-Realms Unboxing