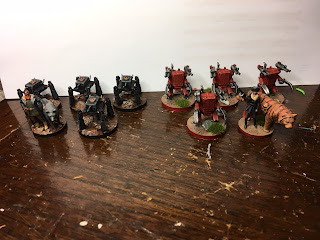 Fluff, theme and overall appearance are things that I think make painting up toy soldiers different from a game of chess. Don't get me wrong, there are board games that I love and I enjoy painting the playing pieces, but it's nothing on creating your own backstory and schemes completely uninhibited by needing to confirm with standards requiring a different player's pieces to be identified. The detail and materials of them aren't as nice as the Mantic ones I have but they serve a purpose. These are from the board game Scythe that I painted up for the Ludoquist, Croydon's new board game cafe.

My first port of call for fluff has been the Uncharted Empires source book. Sadly it's a bit thin only stating that there are "three major kingdoms, each ruled by a Neritican or High King". There's also a small bit about orcs not liking them. Next up is the Edge of the Abyss, 2017 Campaign book. This is a story of the living legend and doesn't really fill out much back story. Due to this I think I'll put the fluff on hold as I hear there is more depth in the new CoK 2018 book.

I like the classic colour of the Mantic models, pale blue and beige works well but as I will be allying my Neritica units with my Abyssals, and as I never really like being the good guy, I want something a bit more sinister. A combination of Darth Maul and Strawberry Poison Frog seem to fit the bill nicely. This will sort out my Naiads and Riverguard. Possibly with black armour highlighted with red but I'll think more about that. Red and black is a classic "Danger, back off" in nature so I think it fits nicely. Thuul and Wyrms will need a bit of thought as I want them to fit in. 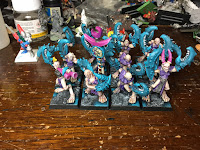 Bases are one of the things I've learned to love about Kings of War. My old GW days were all about filling out blocks of infantry. Even before decent movement trays were a thing it was a pain moving models around and removing them when dead. My Abyssals are on a combination of single bases in case I want to use them for other gaming such as Warhammer Quest or multibased when I have lots of spares or they are Mantic figures. This allows me to in some cases reduce the model count (like my stand in hell hounds). In addition to using all Mantic I'll be trying to get full model count on each base. 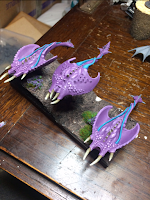 The aim will be to have bases representing a transition of sea into beach with the position a unit will be in the battle line matching their base. Think D Day beach landings. Kraken, and Water Elementals in the sea, Naiads wading out of the surf, Riverguard and Wyrm riders in among the dunes and beachgrass.

I have no idea if I can pull it off but it's good to have a plan.


Boxes are beginning to arrive in the post so I'll have a peak at them and start concocting lists in the next post...