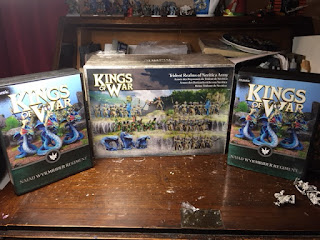 I've been struck down with the flu and it's put a massive damper on hobby stuff. I do pretty much have all the figs I needed and between the Mega Force regular Army, 2 boxes of wyrm riders, a box of elementals and a box of thull i can now muster the following Mantic Models:


There are also a load of cool bits on the Naiad sprues like an otter and frog. It's great that they are paying that attention to detail and there's potential to use them as a Tidal Swarm as I have 20 of each now. 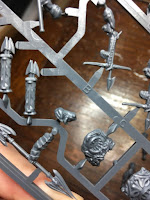 In addition I've got a reaper minis model for an extra mythican and some board game minis from mythic battles for some knuckers. 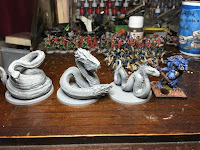 All of this gives me plenty to play with for a 2k force and has a good enough backbone to be competitive. I'm lacking some bigger monsters hence the knuckers but I'll plan to add a Kraken when Mantic release it later this year for some clout. The only miniature I may not use is the riverguard captain. I love the model and the thought of him but he's just not worth the points in my option and if I have enough units to chose from, he'll cut the chop.


I'll take each box over the next few days and have a delve inside to show what they contain and my views on the quality of casting etc.