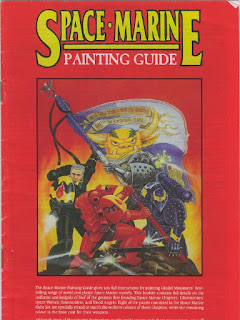 The first ever paint set I got at the entrance to this rabbit holewas the Space Marine Paint set and the small booklet that came with it always captured my attention. The images in it, the background and level of detail was fascinating and seemed so exciting back then.  Looking through the pages and not actually having a lot of the colours led to some interesting paint jobs on the Squat and Imperial Guard Minis I got at the same time. Blood Angel's Orange skin with no undercoat and painted straight from the pot was my first ever foray into mini painting and I still remember the time fondly being supervised by my dad. 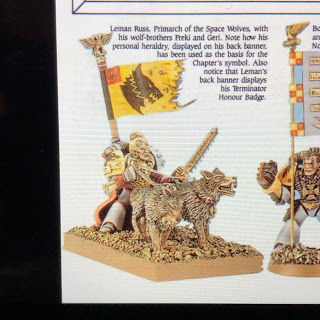 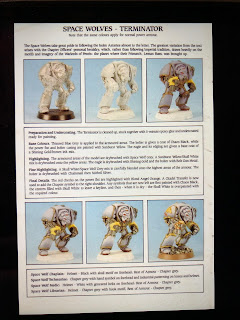 Ever since I got back into the painting game I fancied giving the models in the booklet a crack and see what I could do with them. I assembled the pieces I needed for the Leman Russ character and had a delve about my paint collection to see if I could try something a little different. To see what small child me could have achieved if I had a bit more patience and had eye coordination, I will try to take the advice from the Space Marine Paint set guide with additional pointers fro the 'Eavy metal guide of the era. Further to this and having just dug out some old Red Handled brushes I'll plan to use "period" materials in the form of original paints. With a good shake most are in good enough condition to use, much more so than the bolter shell pots of the later years. The brushes have come up ok-ish with a it of soap but I am not convinced they will have enough of a tip for the detailed work. We'll see. 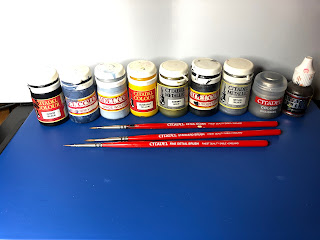 I laboured about the base to use as the painting guide has it on an all in one but I fancied the option of maybe running the minis in a game if I ever played again so individually based them. I used a warlord games 3 base tray to sit them on and I think it will serve its purpose. It will sadly mean I can't add the paper leads to his arm but I am happy enough as it allows me to move the models about 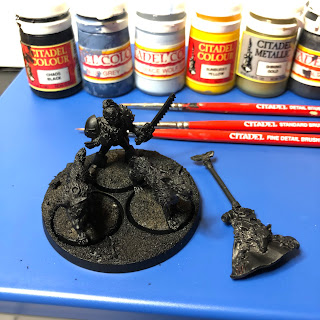 Sadly I have no black spray undercoat from the same time as my potted paints and although I do have some smelly white primer I have take to undercoating in black again lately so have used modern Chaos Black. I fine black a lot more forgiving and tends to give a bit more contrast then the grey I had been using. I am still using the grey for other things but I wanted the Marine to pop as much as I could. 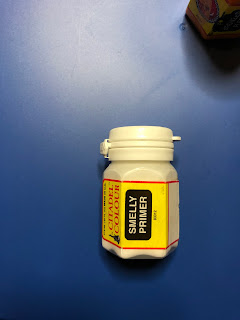 I'll post updates as they go and any paints I had to use outside of those in the guide as I see fit. Hopefully it'll turn out ok.