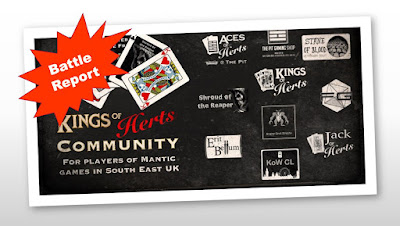 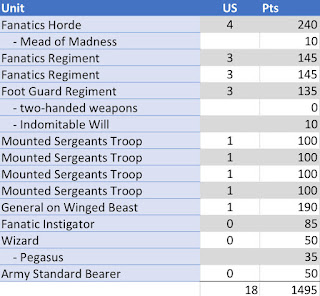 Elliot's put a whole heap of eggs into a surge based list with a Kraken for staying power. 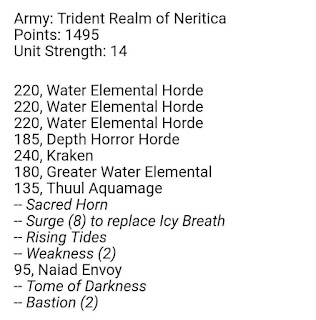 With the surge shenanigans all over the place it'll be interesting to see how speed competes against sneakiness. 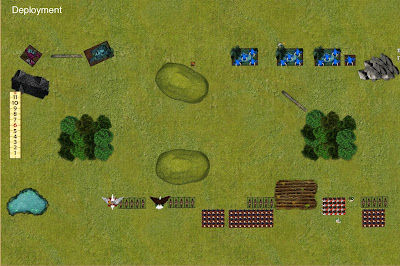 As the game started my vague plan was to let Elliot come into range, hold him off with some chaff and then counter charge. That’s a lot of regenning def 5 to get through though. 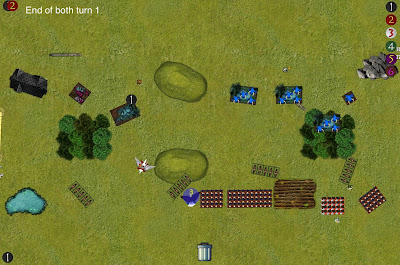 By the end of the first turn both sides had moved a little, Elliot more than me, and my wizard had firebolted one wound into the depth horrors. I’d tried to place things at angles where, if things survived, I might get some flanks. At this point Elliot helped me out, being the outstandingly spirting gent he is. I thought my general could not move sideways as the hill would block his view of the horrors, but Elliot pointed out the cavalry were not on the hill, so having moved the general to the right and put him back, Elliot advised me to redo it. 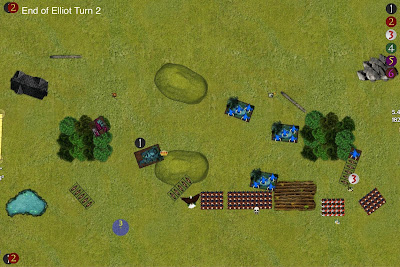 As Elliot's second turn ended, most of my chaff had died, but the plucky sergeants on the right somehow survived. I was facing a bunch of charges, almost all of which were hindered or ensnared. 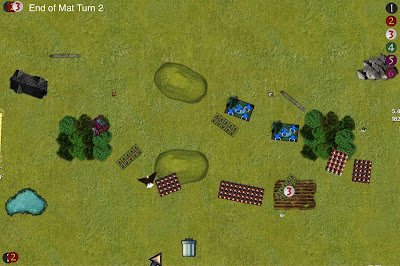 The lucky sergeants got out the way by flanking the foremost water elemental horde, with the fanatic horde coming in for a hindered (by mm) front charge. The guard, instigator and fanatics on the right ganged up on the greater elemental and the general and (just) hindered sergeants on the left took on the depth horrors. The remaining sergeants did their best to hold up another elemental horde. Amazingly, all three melees killed the trident realm units.

At this point I added up Unit Strength in my head, realising I had 17 and Elliot had 7. I had a choice to make. 7 of that was very easy for me to get past the trident realm army and safe if I abandoned all fighting and ran for Elliot’s side. I just had to use my remaining 10 strength to kill one of his units or get one more thing across. I could do this against one of the highest ranking players in the U.K.! 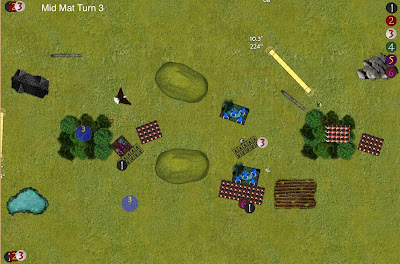 I stopped to think real hard here. I’d had some cracking luck, now to not throw it away. I pushed the guard and the fanatics in the right up out of harms way and into Elliot’s half for 6 potential victory points. I charged the surge casting mage with the sergeants, doing a wound to stop any casting. The fanatic horde did 9 wounds on the horde, which could have been enough, I just need a nerve roll of 8... but didn’t. Still, if they could survive another turn they would stand a good chance of finishing them off and I’d moved the standard to inspire them. On the left I THOUGHT I’d moved the fanatic regiment past the kraken. In my head I had a good chance at 10 vp, possibly more and might get Elliot down to 4. I really really felt I had a chance! To loose I had to loose the fanatics on the left, loose both the sergeants with them, loose the fanatic horde in one turn (or not kill the elemental horde in return) and kill no more units. That seemed unlikely... 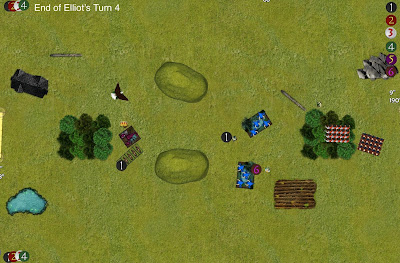 Then Elliot showed that he knows the rules to third edition, and more importantly is an excellent player. The kraken disengaged 1” and THEN measured its charge arc (I thought it was at the start of the turn). With that he rear charged and routed the fanatics. Oh.

The elementals at the back killed the sergeants in front of them, as expected.

The elementals at the front did worse than last time however. Then put 5 wounds on the inspired, fearless fanatic horde. Elliot needed to roll 10 twice. He roll 10. Damn. Then he rolled 12. Damn damn. 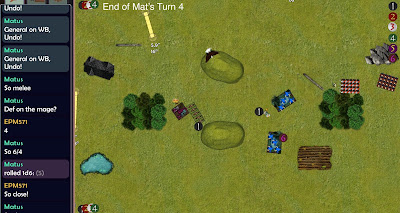 My turn 4 started and it was slipping away from me. The sergeants in the left looked trapped. My general could either help kill an elemental horde, OR gain 1 vp, but not reliably do both. Now either the sergeants had to survive, OR the instigator and general had two turns to finish off the wounded elementals. The instigator and general got into position. Then I moved the sergeants. I was quite proud of the move too. The sidestepped 4.5” and pivoted behind the kraken. The hill blocked them from the elementals. Now the kraken couldn’t see them and they could keep doing this. The standard bearer had a go at the mage in an attempt to disorder him. He almost got the 6 he needed to hit, but 5 wasn’t enough in the ensnaring mage. I could still do this! 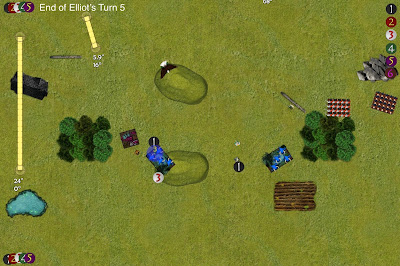 Except Elliot is good. Very good. And I miss things. Moving his left most elementals into the hill, he moved both his surge casters into range. He needed a surge roll of 8, with 12 dice. He rolled 9. Damn. They made short order of the last of the cavalry and we were now tied on US. 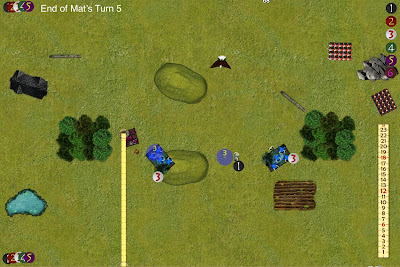 My chances of victory were dropping fast. I now needed the instigator in two turns, possibly with the general for one of them, to finish off an elemental horde. A regenerating elemental horde and not the damaged one (whose 9 damage was now down to 3 anyway). He put 3 wounds on them. Not enough. 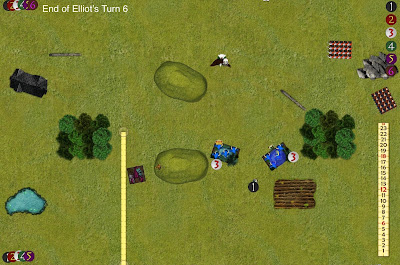 In Elliot’s turn he did what was needed to ensure the draw. Casting weakness on the general and bastion on one of the elemental hordes, he’d made the other pretty safe. 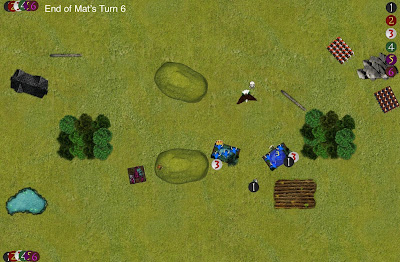 In my last turn I couldn’t risk the general. In his weakened state, against the now -/18 horde with only 3 wounds on, he was more likely to fail to kill and end up giving away his 1vp. If he’d done his average 3 wounds and the instigator another 3, I’d have needed a nerve roll of 9 twice to win. The odds were too long, so he hung back. It seemed the right choice after the instigator whiffed his attacks and did one damage.

Turn 7 might have been enough, another turn for the instigator and possibly general might have had it, but the odds were getting longer and longer. As it turned out the dice roll saved us finding out.

The game ended a very hard fought draw. A cracking game against a great opponent who shows why you should never give up in this game and why the best generals have an eye for those long charges and cunning manoeuvres.