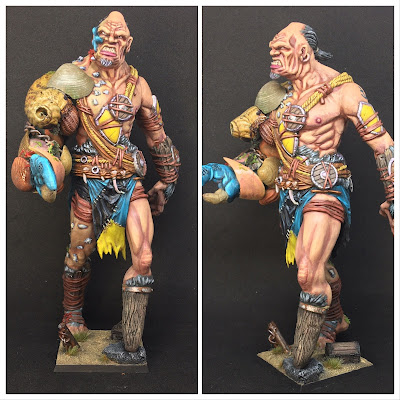 William Black had been an unextrordianry child. Born to the village shipwright and her husband he spent his childhood playing with toy boats in the harbour and setting them adrift in the waves. On his 12th year as was customary he left for a life at sea, enrolled as a deck hand on the Prancing Naiad. A swift cutter, the Naiad spent its working days ferrying wares across the infant sea; young Wiily exposed to all the wonders he could face. As he matured into adulthood it was clear he was a hefty lad, not broad but tall. Put to work furling sails and packing the hold it was apparent his continuous growth showed no signs of abatement. Struggling to manage his enlarged frame William had given up strapping his worn leather shoes as he was unable to reach them. The rest of the crew jibed and joked with their lumbering crew-mate and the soon enforced tag of “shoelace” became part of his moniker.

Everything changed the day the midnight sails of the Swift Vengance hoved into view. Spying the slender eleven frames, a sharp cry rom the crow’s nest announced its arrival and the gruff human crew set to rigging their vessel to flea. Their prow crashed through the waves as the made good their escape; abruptly this was halted as the previously roaring sou’wester quietened to a gentle breeze. As the sails were swiftly set to make use of any breath of wind, shouts of alarm rang out. The Eleven slaving ship still gained on them. As it came closer the reason became clear. Lashed to the figurehead was what had once been a mage. Now battered and tortured beyond recognition the unfortunate victim’s enchantments were propelling the ship onwards.

The boarding was swift and decisive. the Naiad’s crew fought, died or were captured. Consigned to a life of slavery William pondered his escape. As they headed on the long voyage to shore he bided his time. Studying their captors movements and planning his escape. As the time came he waited for the guards, scantly wrapped in the darkness of the hold, feigning sleep. A black clad elf approached and roughly kicked his recumbent form, in the same instant the giant man reached out and broke the elf’s leg in two before rushing through the hatchway onto the deck. Blinking as he stumbled into the light he was met with a chorus of laughter. The hatch to the hold was surrounded by a stout iron cage that prevented his further progress.

A pale skinned warlock descended the forecastle stairs towards him, a mild smirk of amusement split his haughty face. Approaching the bars he ran an ornate bronze staff along them, gently whistling as he did so. As he neared his captive the mirthful atmosphere gave way to a deep look of hatred. Wrestling with the unfamiliar words he meticulously spat.

“Howe Dayre You. Howe dayre you hayve the impudancye to trye and escaype. You shalle end your dayes as our captyve, thys hase already been decyded, for your arrogance though you shalle lyve out those dayes in suffering”

Reverting to his native tongue he muttered a series of harsh and brisk phrases before extending his narrow fingers towards William. A gentle violet glow enveloped him but as soon as it had appeared it ceased. Satisfied with his work the Elven Mage turned smartly while barking orders to the nearby black corsairs. The two guardsmen forced William back below deck using their wickedly hooked halberds to slice and tear his skin. They recovered their fallen comrade and returned to their posts. William lay down to contemplate his future, resigned to a life of captivity and hard labour he closed his eyes and allowed the lapping waves to rock him to sleep

William woke with a start to the world ending. The splintering of timber and the ring of blade on blade announced the sounds of battle on board. The bellowing of deep booming voices soon became all that could be heard and it was clear the elves were no longer in charge. William cautiously advanced up to the trapdoor he had stormed through only a few hours before. He gingerly pushed it open to be greeted once more by the bright light of day. On this occasion in stead of the slender ebony warriors the deck was awash with hulking brutes of ogres in gaudy attire drinking and singing at their achievements. He stood unnoticed for a while before one of them caught sight of him and plodded over.

The warrior cut off the sentence, his mouth agog and pointed at William’s right arm. Finally recovering the gift of speech he roared.

Confused, William glanced down at his arm and felt cold. Where his flesh and blood had been but hours ago there was now a deep golden hued cluster of shells and other crustaceans. As his gaze slowly traversed the scene he let out a final scream to find where his hand had been a wicked claw now resided. Finally becoming aware of his surroundings after the initial distraction of the battle he realised his head was brushing against the roof of the cage he was stood in. Already used to being tall he now have would towered over his former self, his already enormous frame had grown considerably. Frantically he began scratching and pulling at his new appendage, slowly it dawned on him it was pointless.

Barely containing his laughter at the situation the ogre pirate bawled to his shipmates to come and see the freak.

“Whatsya name boy?” One of them called between deep peeling tones of laughter as he unlocked the steel frame’s gate.

“Wiiliam” the by replied “They call me shoelace William”

“Well Willy, welcome to our crew, Jock’ll be wanting to meet you” 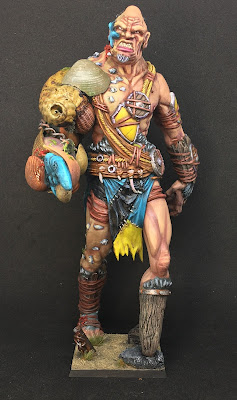 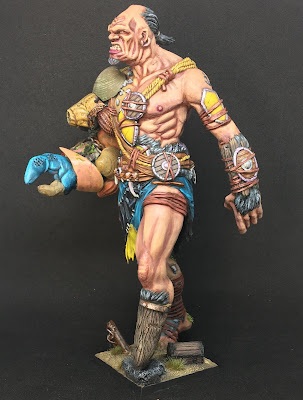 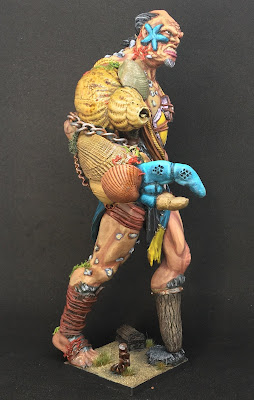