Just over a year after starting up the Trident Realm army and making up to enough options for 2500 of painted models I finally have something I can use without having to panic about painting when entering to a tournament. It means I can take my time and look to the next challenge. I have always wanted to use my older Citadel ogres and maintain a constant affinity with goblins; combining this with the allies I have been using in my Trident Realm the choice seemed pretty simple.


Being reasonably good at maths I can see that there are more "Pros" than "Cons". Decision made.

The additional time I have available to model and paint the army also means I can do the whole lot in stages. The plan is to base everything and model it then move on to painting it. This should work out a lot more efficient as I can batch paint all the flesh for example and reduce the mixing time between shades and layers etc. It also means I can be consistent in colours such as those used on the bases. I am happy with most of my Trident Realm but the paint quality and basing varies greatly. My Thuul and Gigas I spent ages on the bases then time was tight and I rushed the minis. I find it incredibly hard to go back to models that are "finished" so this is probably how they will stay.

I think I have fallen into the trap before of my basing being a bit hap hazard and although similar not unified enough to pull together as an army. I am hoping that by sticking largely to just sand this will help. Working height into multibased units I have found can help to protect the models from getting snapped off in transit. It worked for my Thuul when using pillars and the ogres with the boat wreck. I'll be aiming to continue this where I can. Using the same barrels and coins all over the place should be handy too. Keeping some units on individual bases will make transporting them far simpler and they'll take up less room too. My lose theme for the units will be:

I'll try to make the units as WYSIWYG as possible with the high CS units having bigger weapons, higher De having more armour etc. As I'll be using multiple sculptors, ages and even a couple different company's minis I'm hoping that a common palette and basing will tie them together.

I want my army to be mostly ogres. They'll be doing most of the fighting and any goblins that are present will be purely to make up the US for objectives and get in the way. I'll probably stick to infantry too. I do like the idea of chariots but the base sizes scare the heck out of me and as they can't shoot unlike the Elven ones they have to get stuck in, likely hampered by terrain and offering flanks all over the place. I may take a giant or mammoth but mostly that will be governed by modelling options. It's kind of cheating as I had painted up these before I started out on the army but first up... 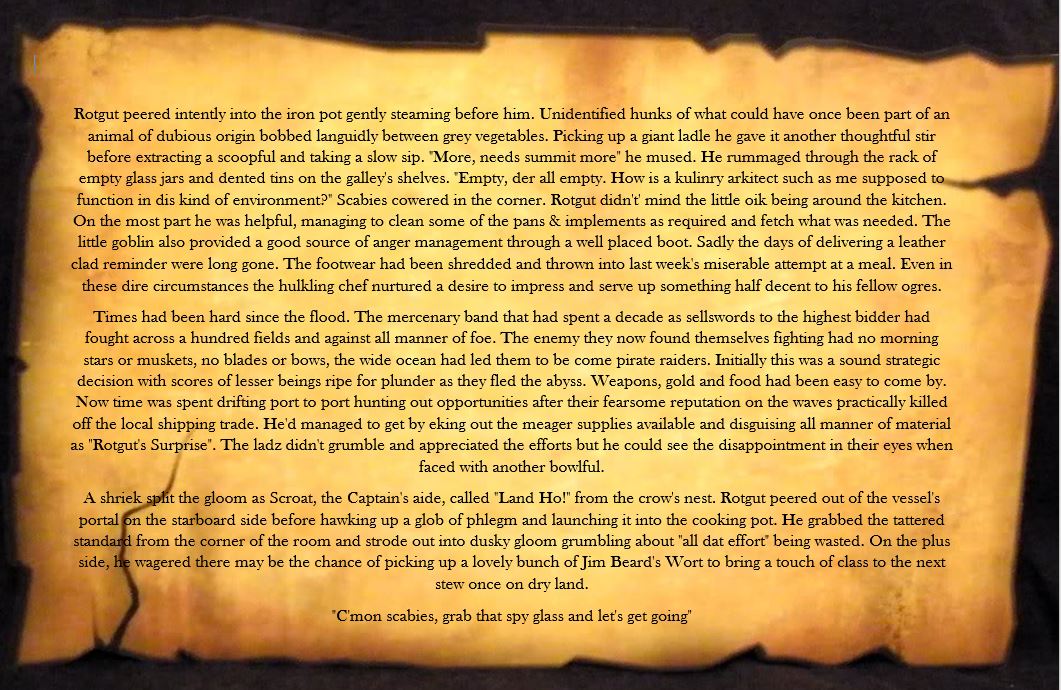 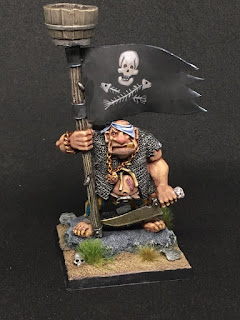 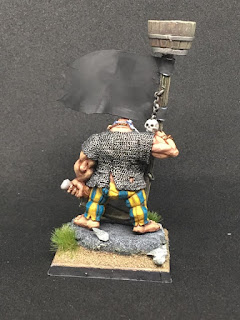 Rotgut is my first attempt at a freehand banner and a chance to paint one of the ogres I have always loved the character of. He;s from the era of models that I grew up with over two decades ago and epitomises  the era. I figured the oversized weapon looked suitably like a chef's knife and like the idea of him having a kitchen assistant to accompany him into battle. I am pretty happy with the way the trousers and other details turned out. Painting ogres I've found a lot easier in some ways as things like the eyes are simpler, but large expanses of flesh and muscle can be hard to get variation into. On the battlefield I think the nimble and pretty strong melee stats along with brutal can really help tip the balance if he sneaks into a flank. he may get a boom stick or other ranged weapon to give him something to do while wandering around the backlines. 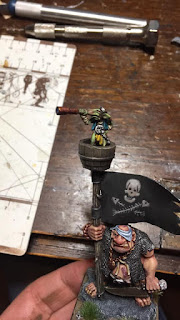