The end of distractions for now

June 28, 2018
I've polished off the last few odds and ends that I needed to get done and can now turn again to the Trident Realms army that I planned at the start of the year. Current model count is:


The general Idea has been to adopt an MSU approach as inspired by The Outcast's blog. With so much ensnare and the option now to have the banner of the griffin and the new Aura of Heroism spells there's a strong chance of lots of small, maneuverable high nerve units at my disposal. It also means I can concentrate on smaller units and get more of a sense of accomplishment when I have finished them. I'll be sticking to a lot of Thuul with their new speed buff and the formation improvement. Backing this up with a couple of Knuckers and a block of Naiads for staying power should fill it out enough. I'm aiming for at least 75% of the army to be Mantic and the only exceptions will be the Knuckers and the second mythican,. 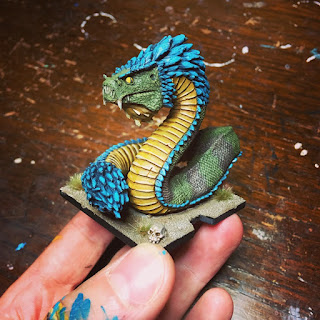 I've managed a good start so far with three units down. The knucker was from the Mythic Battles Pantheon board game. I've tried to stick to the same basic palette to tie in with the rest of the army and a simple base 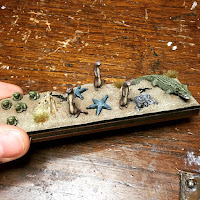 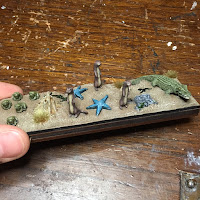 . The tidal swarms are a combination of Mantic otters and frogs, some old metal crocs I had and some home made green stuff star fish. The Starfish are my first voyage into proper(ish) sculpting and I learnt a heck of a lot while doing them. Although they are only small I must have spent about 3 hrs just making 6 of them on and off. My findings and leanings for next time are:


I'm sure there are heaps more sets of instructions from pros but this is what I figured out as I went along. The Tial swarm bases are also the first time I had tried to make any water effects. For the beach landing Naiads I'm planning something ambitions with resin and splashes of feet so this was a good test case. Having made the rockpool up with some coarse cork and a small rock I finished all over with filler and a coat of PVA and sand to seal it all. When painted using the water effects was as simple as just using an old brush to fill up the void. I brushed a little onto the moss strings I'd used for seaweed to give a moist look too. Here are some WIP pics showing steps along the way.

1. Stick dense foam and other bits down, making sure there is room for ths bigger minis such as the croc. I used the Dark Ops MDF bases 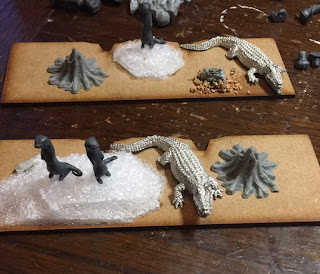 2. Add white, smooth finish filler over the top, making sure that the otters' pins are stuck i and there is a hole available for later. Then remove them to make them easier to paint. The Crocs were low enough and simple enough to leave. Their feet just stick using the filler 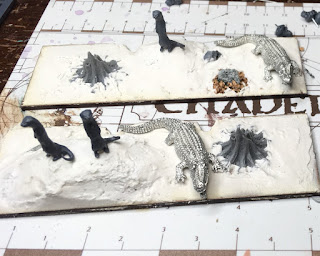 3. Add fine sand to the base using PVA glue, wait for it to dry and then reseal using PVA. Redrill the holes for all the model's pins to attach them to the base. 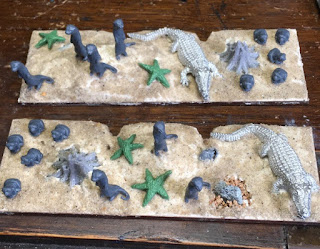 4. Paint it all up with Steel Legion Drab and drybrush with Ushabti Boan. Adding tufts, water effects etc. 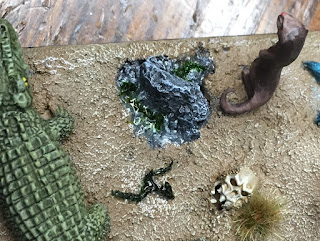