April 15, 2018
Finally I'm back on with some Kings of War while juggling all the other side projects. I've tried more and more detail on multibasing that I've been using but the units are now split into two very separate groups:
This has lead to some really rewarding projects. Starting off with just some wastelands of the abyss looking back I like the height difference but I think it's really lacking detail. I need a unit of fleshlings to provide an unlock and some chaff so despite them being one of the lowest point units in the army I've raided my bits box and built a temple/dungeon kind of base which I plan to fill with a range of barbarians who have thrown their lot in with the abyss.

Buoyed by the sheer number of manufacturers for the base I thought I'd follow suit with the minis. Current bits for the base are:
This is followed up with the Minis

Here's a set of WIP pictures 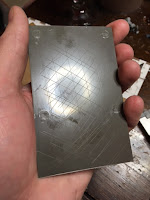 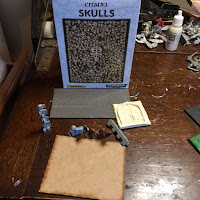 Raw Components and And keying the plastic walling to give it more grab to the MDF. I used superglue and it bonded fine. MDF tends to absorb glue but the thicker style glue I use doesn't seem to have any issues. It's force of habit keying surfaces and I'm not 100% sure it's needed for superglue. 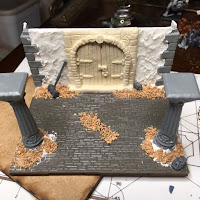 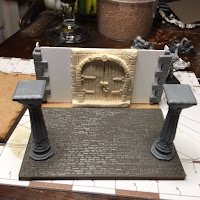 Using the plasticard and wall corners. The columns where trimmed as they were too tall. Having them the same height as the wall should also make the models less vulnerable to transport. The Cork is used to add variety and the filler on the walls, both then sealed with thinned PVA. 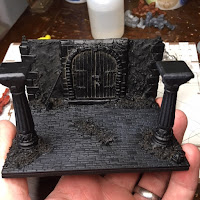 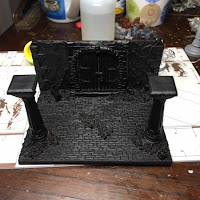 The base is sprayed black using Halford's Primer. I find it's just as good as the expensive stuff and covers fine for scenery. A heavy grey dry brush with progressively lighter colours. The door is filled in taking care to leave the metal black as it gives a better base coat for the steel colour 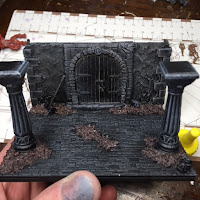 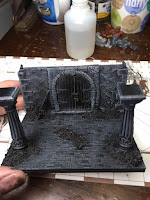 Lighter brushing in patches breaks up the colours and gives more variety .Almost white in someplaces. Adding browns into the debris gives some contrast. The walls and rubble are then all washed with Agrax Earthshade for some depth and more variety.

Finally all the details such as the hinges, skulls and warhammer are picked out and highlighted. After the washing, the stone and floor are given a final couple of dry brushes ending in white. Now the challenge of fitting all the figure so the base. I've really enjoyed a first stab at "proper" multibasing and have other plans lined up for the next set of units. 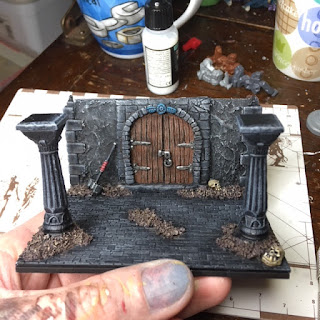